In honor of The Conroe Service League’s 65th Anniversary, a historical plaque has been awarded. You can read an in depth version of our history here:

The Conroe Service League was organized in 1955 with 12 charter members for the purpose of fostering interest among its members and the community in the social, economic, cultural, civic, and educational conditions of the area and to making effective their volunteer service.  The League began its service identifying needy families, and expanded its service to volunteering in the local hospital.  With the help of generous donations, the League purchased many items for the hospital, including furnishings for the children’s ward, an anesthesia machine, a ventimeter ventilator, a “baby bird” respirator, a neonatal intensive care unit, and furnishings and stained glass windows for a prayer room. The Conroe Service League was instrumental in helping inoculate Conroe residents with the polio vaccine.  Past service projects of the League included volunteering at local convalescent homes, decorating Christmas trees at the library, Secondary Literacy, Welfare assistance, and a Well Baby Clinic.

The League started the Parents as Teachers program, which was later assumed by the Conroe Independent School District.   Before art programs existed in Conroe’s elementary schools, the League members visited the schools with works of art and gave lectures on art and art history.  The League organized summer reading, music, and art appreciation programs for children in order to foster cultural arts of the community.  The League also sponsored a Great Books discussions group, performances of the Houston Symphony, opera, dance and musical performances for elementary students, and group tours of the Houston Museum of Fine Arts.

In 1957, the League established The Bargain Box as a resale shop to make good, used merchandise available to the public at considerably reduced retail rates.  Disaster victims and needy families were provided clothing and household goods from store supplies.  Other monies earned at the Bargain Box were combined with funds obtained in other fundraising efforts to support a number of local organizations which have included:  Montgomery County Youth Services, Children’s Protective Services, Women’s Shelter, The Crighton Foundation for performing arts, Montgomery County Choral Society, Special Olympics, Prevent Blindness Texas, City of Conroe Parks and Recreation Youth Scholarship Program, and the Rainbow Room.  Past fundraising events have helped to purchase a van for the Fairway Home for teens, a statue for the Montgomery County Central Library, and a flagpole memorial commemorating Montgomery County as the birthplace of the Texas flag.

In 1986, the League opened the doors of The Heritage Museum with the help of a League fundraiser along with generous donations of several other sources.  The League served as the administrative body of the Museum for many years until it could function on its own financially.  The League continues to donate money to support the Museum and its programs. In 2005 for its 50th anniversary, the League donated a fountain to the museum.

While the programs of the League have changed over the past years in order to meet the needs of its rapidly growing and changing community, its mission continues to be directed toward the betterment of Montgomery County.

Whatever the need may be, Conroe Service League is here to serve. It’s our mission.

… to provide organized service opportunities for the women serving Montgomery County in the areas of education, cultural arts, health, and welfare and to effectively use the work of the League for the betterment of the community.  Learn More …

Give a helping hand to those who need it! 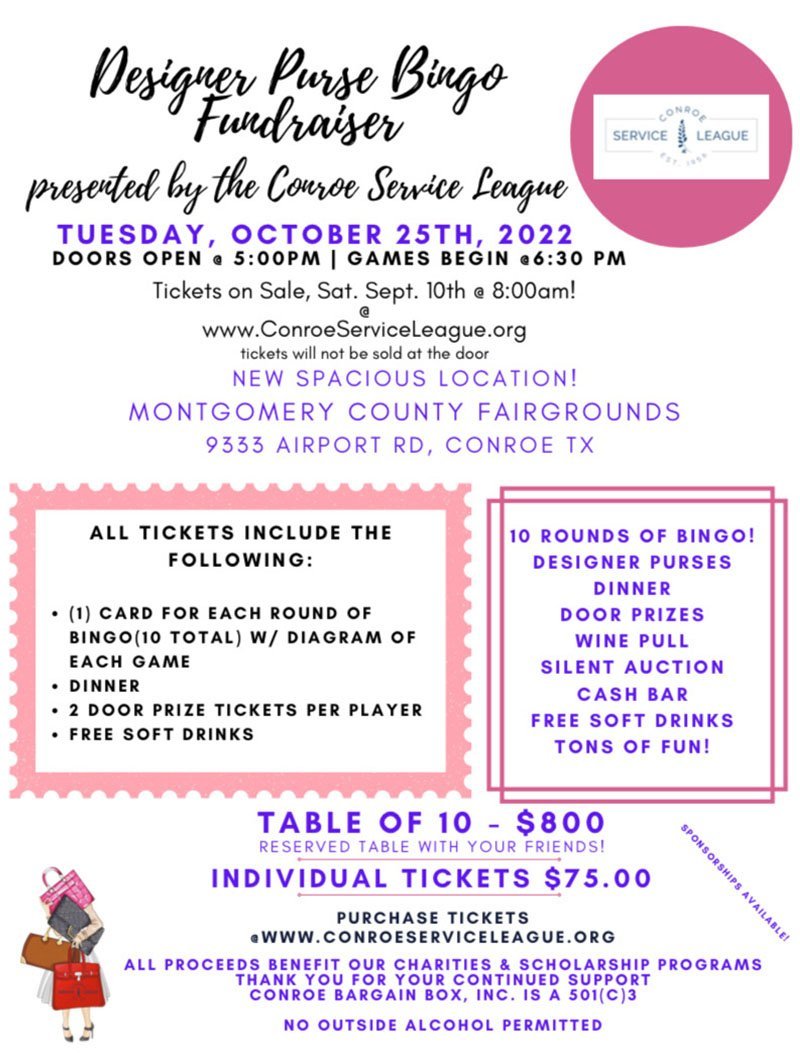 Sign up to stay in the know about upcoming events and fundraisers. You’ll also get our Recipe of the Month and featured information about our sustainers.